My friends think I am crazy. But you know what, it worked!!!! 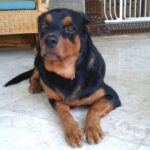 Hi My name is Michelle and I have a beautiful Rottiweiler named Cruz.

I travel a lot and this year poor Cruz was left with house sitters and a dog walker for 4 months.  When I returned home I knew something was wrong with him instantly. I know he hadn’t been mistreated, he had lots of attention from the sitters and their children and lots of exercise.
Fed good food – to the point of being overweight!!
I had received pictures so I knew he was cared for.   But he looked miserable…..

I tried a bath. Lots of love and affection. But he just looked at me with big sad eyes.  I checked for ticks, any health issues. NOTHING!!!

So why was he so miserable??? I just couldn’t work it out. We where back. Surely that would make him happy.

I contacted Christina.
I sent her some photos and she communicated with Cruz.
She explained to me he was depressed. YA RIGHT. ITS A DOG!!!! Although a very loved dog I couldn’t comprehend at first what she was saying. But the more she spoke to him, she spoke to me.  It made perfect sense!!!!! His world had been rocked and he felt lost, scared and abandoned!! My poor Cruz…..

Christina one day said. “Feel his tummy, it’s hot”. Really. Really. From a photo…..
But I did as I was told. OMG HE WAS BURNING UP !!!  Ok. Now I knew she was the real deal. She made a suggestion to change his diet. He hadn’t eaten in days.  I made what she suggested, a weird combination lol.  Guess what?? He ate it!!!!

So as much as I was sceptical, I really needed to listen to her.
Over a few sessions including one when she mentioned his eye, I got home from being out , he had sprung an eye infection…..

One thing I did really appreciate about Christina is she also was open to medical care. When things went on a little too slowly with out drinking or eating she did suggest we may need to get a vet to check him. Just the day I was going to was when he turned the corner.

Well Cruz is happy, wagging his tail again, eating his preferred food and just a joy.  He has even lost his laziness. I didn’t realised he had even stopped barking. When I heard him bark again it was like WOW!!! I seriously can’t believe the difference. I talk to him more also. Proper talking. Not just a “see ya” as I walk out the door.  Some of my friends think I am crazy. But you know what, it worked!!!!!
We are about to go away again just for 2.5 weeks and I am getting him prepared for it.

I am very very Grateful to Christina, she really did make a massive difference to my beloved Cruz. But also to myself. The benefits are amazing. For all of us.  Cruz is certainly his old happy self. Actually probably better than his old self, he is a new dog. Happy. Content and just beautiful.