Amazed by the effect the MUSIC had on Summer and Shadow 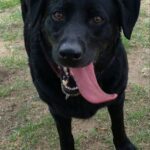 It is with a deep sense of gratitude that I write to you after your recent communication with my Labradors, Summer and Shadow.

2015 was an extremely stressful year for us as a family and due to circumstances beyond our control, we had to be separated from Summer and Shadow. It was with great joy and thankfulness that we were reunited about four months ago.
It soon became evident though that all was not well with both of them. I contacted you and you immediately made time to communicate with them separately.

It was apparent, from your feedback, that they had experienced a considerable amount of emotional and physical trauma in the time that we were apart. After your sessions with them you were able to describe their fear and pain to me and you made recommendations on how to resolve their issues. Besides a lot of love and touching, you recommended I play music to them which I have found soothed them and helped to reduce their stress and anxiety levels.

I am amazed at how much the music recommended by you has benefited them. They have both improved greatly. I can take them for walks in the Park whereas before I couldn’t because they were in so much pain and limped so badly. They were both dreadfully depressed and lethargic and did not want to do anything and now they follow me around and wag their tails and their eyes shine with joy.
​
Thank you for the time and effort you invested in communicating with Summer and Shadow. The benefits have been numerous and it is wonderful to be in tune with them again.